A visioning process for Scottish Care 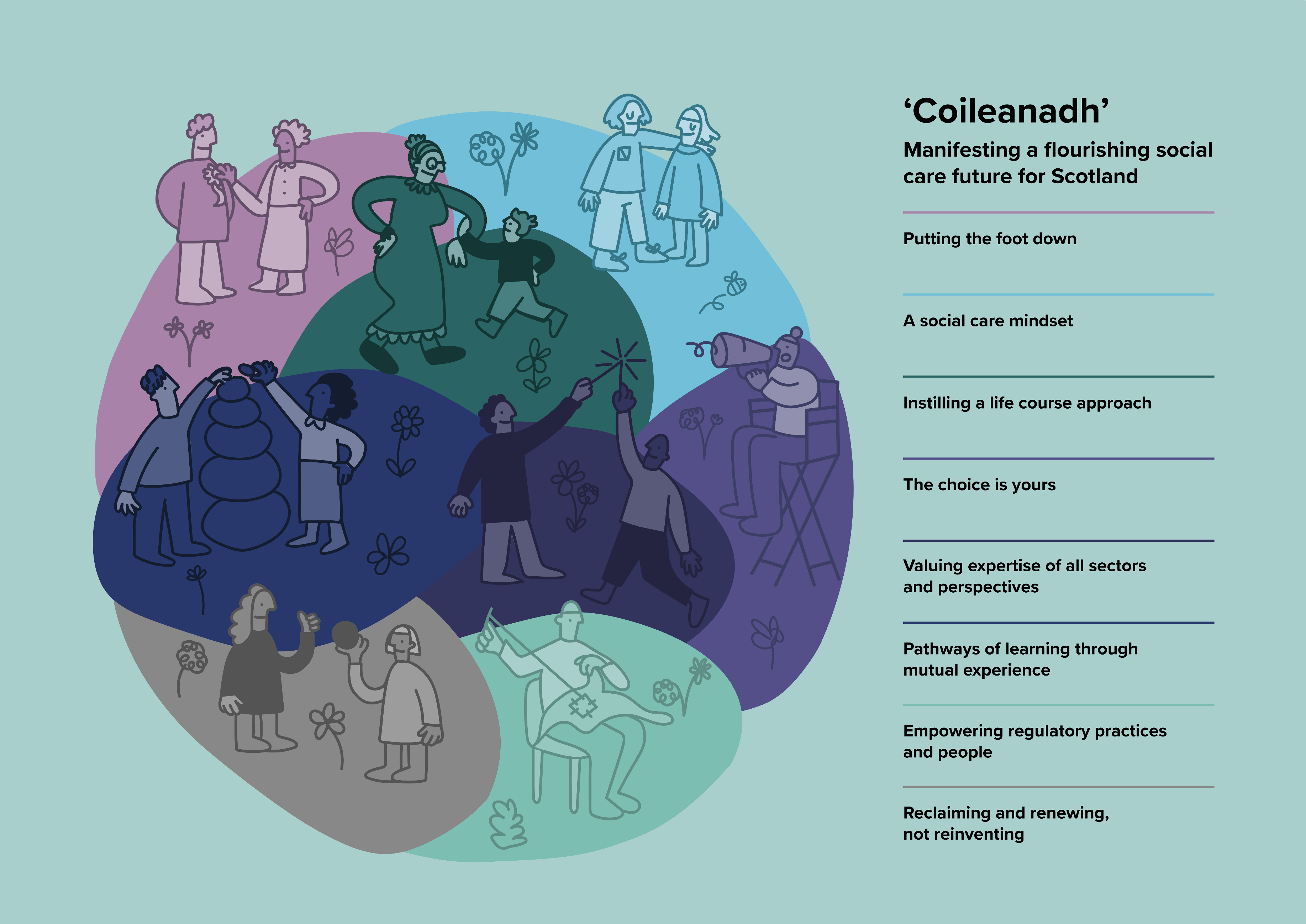 Scottish Care had already conducted a research project exploring the impact of Covid-19 on social care in Scotland. The challenge here was to support the Scottish Care team to use those insights as a way to fuel a participatory futures project, which challenged key stakeholders in the care sector to define an optimistic vision for the future of the sector, while also helping them to articulate this vision ahead of the 2021 Scottish elections.

Scottish Care is the representative body for independent social care services in Scotland. Their vision is to shape an environment in which care services can deliver and develop the high quality care that communities require and deserve.

Scottish Care is the representative body for independent social care services in Scotland. Their vision is to shape an environment in which care services can deliver and develop the high quality care that communities require and deserve.

In the project we supported Scottish Care to design a participatory engagement that they could conduct on their own. Once they had done so, we helped them synthesise their findings into a future vision, which we summarised with an engaging visual output.

These efforts were split across two phases of work. Firstly, we designed the participatory engagements that the Scottish Care team would then facilitate. Here, it was crucial that the Scottish Care team co-owned the engagement design, so that they then felt equipped to deliver it themselves. As a result, we worked in a highly embedded and collaborative way with their team.

The engagement was built from the body of knowledge and insight that they had generated from their previous research, and about the challenges facing the sector during the pandemic. We helped them develop a playful survey and a workshop outline which would help them work with key stakeholders to build this body of knowledge and insight into aspirational vision for the sector.

Once the engagements had been conducted we reconnected for the second phase; designing a way to communicate the resulting vision. At this moment the Scottish Government were preparing for an election and had announced plans for a national care service in Scotland. We helped Scottish Care to capitalise on the moment and articulate their recommendations for policy development and change that would support this vision.

The final output was a visualisation of this vision and an accompanying report.

A spotlight on Collaborative Working Sessions

This project required working closely together to ensure that Scottish Care felt real ownership over the engagements they would conduct. So we created a working format that allowed all key decisions to be made together, efficiently, and in real time. These sessions were a series of 2-hour working sessions for members of Scottish Care and the Andthen team with clear, yet also flexible objectives and agendas that took us from kick-off to hand-over. The majority of the work completed in the project happened in these sessions.

On a project with a tight budget, these working sessions helped us make quick decisions together, minimised dependencies, and minimised the need for lengthy handover sessions — all of which helped us ensure that resources were allocated efficiently. 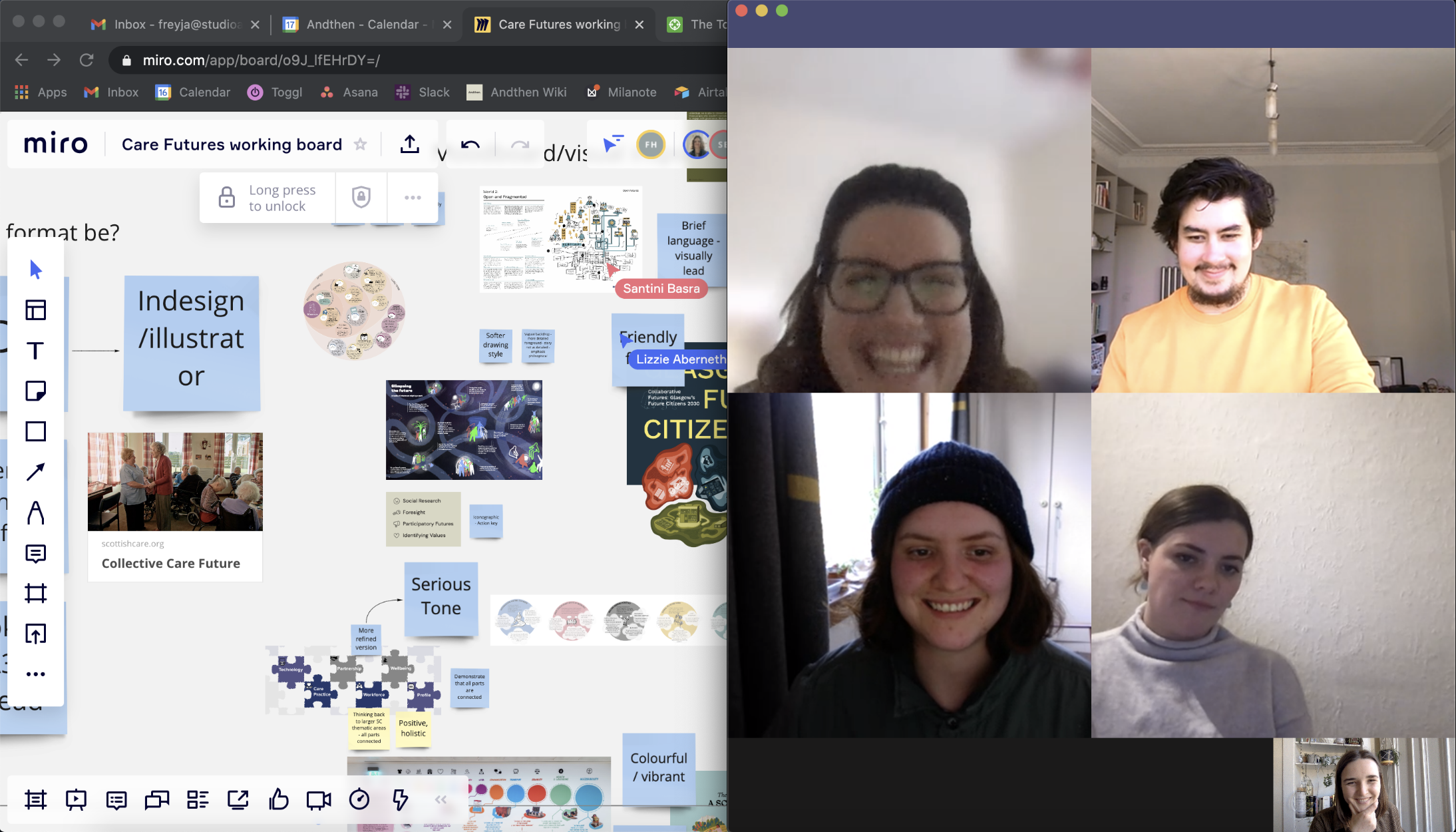 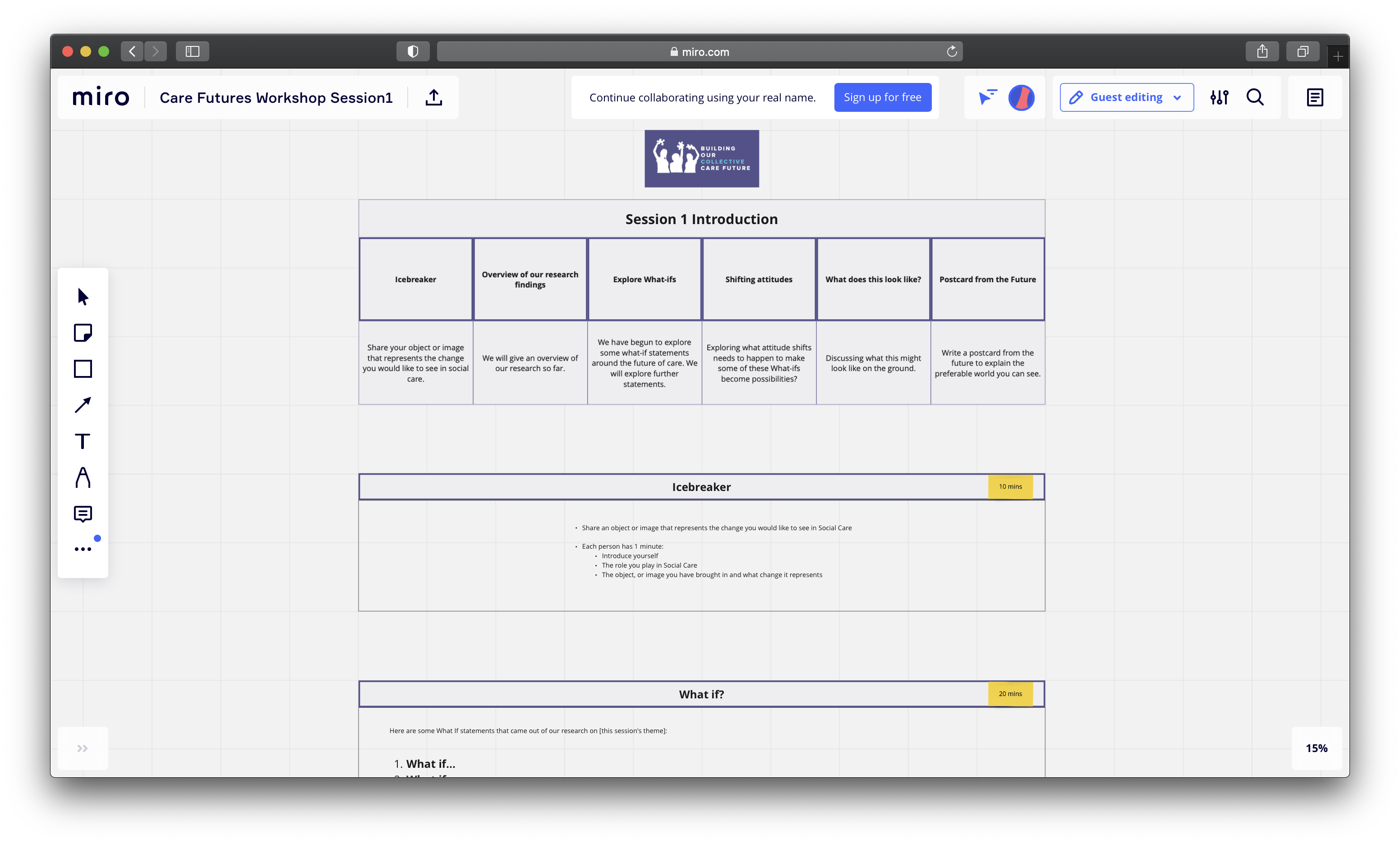 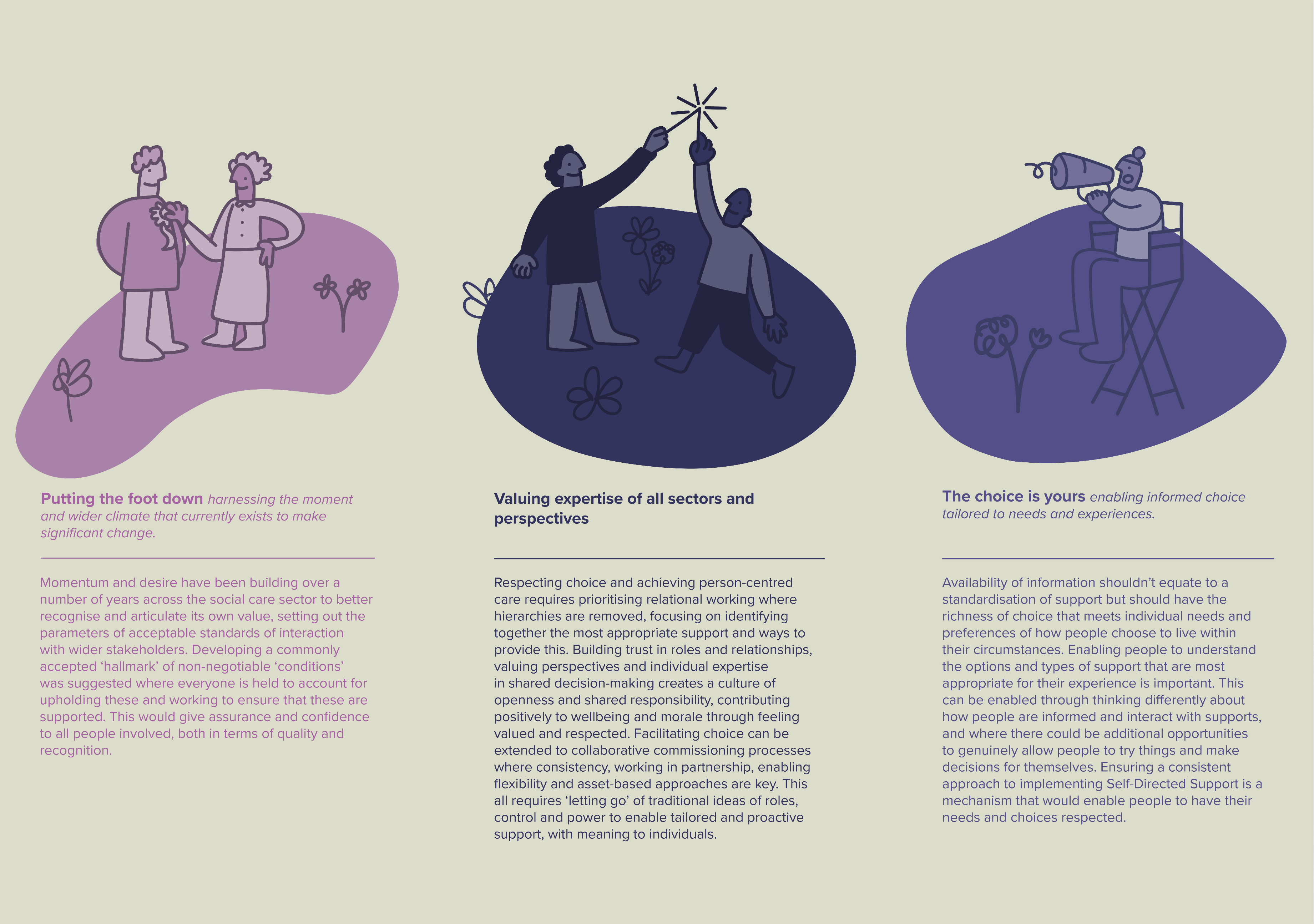 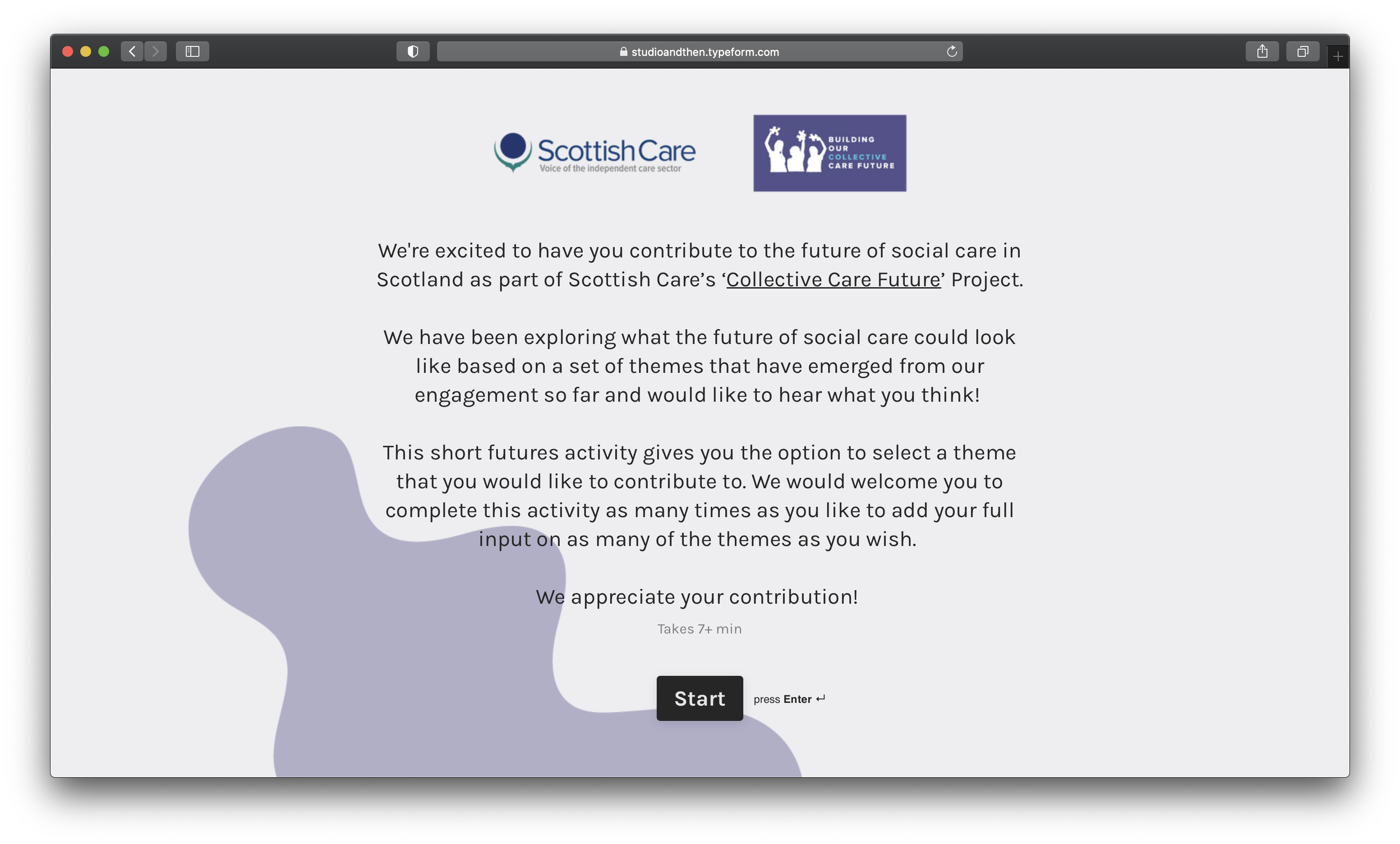 Helped Scottish Care to further articulate our vision for the future of care, including through the development of a Manifesto in advance of the elections.

Supported further engagement with stakeholders around the future of care and widening of our network, including providing the basis for a webinar around the launch of the resources to inspire further collaborative action.

Enabled sharing of Scottish Care’s vision across broad policy and practice areas, shaping the future direction of Scottish Care’s work in line with national work on the future of care. This work is regularly referenced by Scottish Care in consultation responses, meetings and conference presentations to inform, influence and encourage action.

Working with Andthen was a hugely positive experience. Their approach and skills brought fresh perspective and a different focus to our project, enabling us to combine important subject matter and creative ideas to create resources which were both refreshing and impactful.